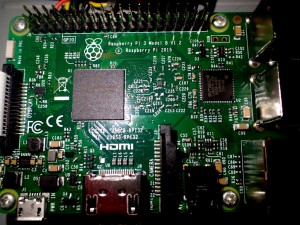 Recently I wrote about my car computer project based on the Raspberry Pi 2. The performance while acceptable in most situations, would drop and get noticeably sluggish during resource intensive activities such as processing large play queues or music directories.

The free space around the Pi was constrained with the display board on one side and the Adafruit ultimate GPS hat on the other side. This lead to some some concerns about heat build up that stopped me from over clocking the Raspberry Pi 2 based system past 900mhz. As installing a heat sink on the board was not an option.

Many people have written about their benchmarks with the new system with most metrics pointing toward a 20 – 40% performance gain over its predecessor the Raspberry Pi 2. After dropping the new board into my car computer the system definitely experienced a performance boost with the boot up time decreasing dramatically. Transitioning between pages and scrolling with my Ionic Framework based UI for the car computer also felt a lot more responsive and smooth.

The Raspberry Pi in this situation is going to be operating from a car’s electrical system power consumption is obviously an important metric. When originally testing power usage of the Raspberry Pi 2, I noticed the current draw would peak in the early phases of the boot process with the system drawing a maximum current of 870mA at 12v.

When running the tests again with Raspberry Pi 3 the peak came later in the boot process as the GUI was starting up. With current draw maxing out at a little over an amp ( 1.07amp) for a power consumption of just under 13 watts.

Once the system had fully booted on the Raspberry Pi 2 current draw would flatten out near 650mA for a power use of 7.8 watts. 850mA was the average on the Raspberry Pi 3 after everything was fully loaded with the car computer’s related services operating normally. Giving a normal power usage of around 10.2 watts.

A slight increase in power consumption but given the extra built in functionality and the performance boost all up a small sacrifice to pay.

Building a car computer with the Raspberry Pi 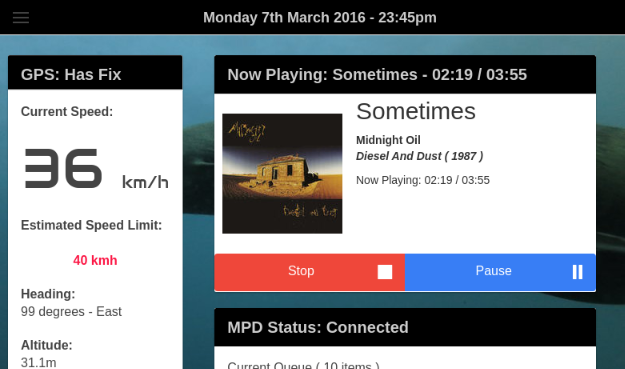